EASTERN BLOK The Los Angeles Times calls Eastern Blok’s music “relentlessly innovative work.” Downbeat Magazine claims that “the ensemble playing is often breakneck and consistently challenging.” Acoustic Guitar Magazine raves that Eastern Blok plays with “blazing virtuosity and sheer beauty.” After performing over 300 shows a year and selling more than 3,000 records, the band EASTERN BLOK formerly known as The Goran Ivanovic Group has recorded a new album, changed their name, and has been successfully packing venues throughout the country since the release of their self-titled debut album in 2005. The group features classical guitar virtuoso GORAN IVANOVIC, who teamed up with DOUG ROSENBERG on saxophone and flute, MATTHEW ULERY on bass, and MICHAEL CASKEY, a five-time Detroit Music Award and Downbeat Magazine Award winner, on drums. EASTERN BLOK’s “extraordinary pan-cultural ensemble effortlessly blends classical and jazz music with the rich folkloric traditions of Macedonia, Bulgaria, and Serbia 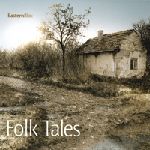 After the whirlwind experience of Goran Ivanovic Group (Balkan Song Records, 2006), the group, which has remained stable, changed its named to Eastern Blok. Incredible as it might seem, Folk Tales is tighter and more complex than the first album, while retaining the earlier energy and abandon. While virtuoso guitarist Goran Ivanoic remains ...