So much has been written about Dick Haymes, unfortunately everyone always ends their sentences with, "it’s a shame, his personal life was such a mess". You could say the same thing about most celebrities, however for some reason people tend to let Dick’s private life affect the fact that he was the consummate performer. He rarely allowed his problems to reach an audience, perhaps that is why he was so hard on himself; he never wanted to disappoint his fans with anything less than perfection. Conceivably, this maybe one of the reasons that he chose to leave the United States for Europe in the early 1960s. If he lived today, would any of the things that made headlines in the post-war era cripple his career now? No one can really answer this question, as we know, most celebrities can only boast about a five to seven year high anyway; and Dick Haymes had that and more

Jeff Ellwood: The Sounds Around The House

As a professional musician hoping to have a meaningful career, hiding one's light under a bushel, may not be the best way to recognizable success. Such might be the case for tenor saxophonist Jeff Ellwood. He may have fallen into the trap evinced by the Dave Frishberg ditty “I Want To Be ...

Meet Tony Vitti: In 2008, I was a singer in a metal band, but I decided to play jazz and blues in 2012, after some tours, some scenes. Instrument(s): I'm a singer, even if I play guitar, I sing, sing and sing again. Teachers and/or influences?

Dick Haymes: A Major Player for Whom Luck Was No Lady

Dick Haymes: A Major Player for Whom Luck Was No Lady

Dick Haymes Complete Capitol Collection EMI Gold 2006 If you've read this far, it's either because you don't know who Dick Haymes is and wonder whether you should, or you recall some passing mention of him by a grandparent but little else. No offense intended to retros and ... 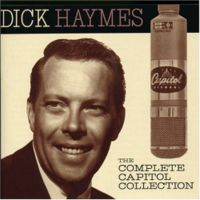 Just released, this is the 5th volume of the Dick Haymes Society's project to issue as much of previously unavailable Haymes material as possible. Covering the years 1945 to 1947, most of the cuts on this CD come from his Auto Lite shows of this period. Other cuts are from the Personal Album series made for ...