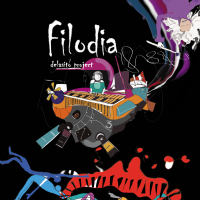 He is a founding member of many percussion bands (Percaddiction, Kroustodia, ΣΩΘ Percussion Quartet) and the ska-reggae lifetime project 'Band Fatale', while at the same time he engaged in various other ensembles (Anatolika Zitimata, Mr Pulse).

He has composed original score for many theatrical and contemporary dance performances. He formed Delasito project, which acts as his main vehicle of artistic expression.Guided by the special and atmospheric sound of the vibraphone, Delasito project have developed a lively repertoire of original compositions based on influences from the jazz/ funk scene as well as classical music and free improvisation. In June of '20 they released the first album with original compositions "Filodia".