A lifelong resident of the San Francisco Bay Area, Deborah Winters' childhood was immersed in music and dance. Heavily influenced by her father, who pursued the drums as a young man, and by her mother, who was a professional ballet dancer for the Oakland Metropolitan Ballet Company, Deborah developed a passion for music, dance and the theatre at a very early age. Big Band sounds rang through the household where Deborah and her father listened to the likes of Ella Fitzgerald, Duke Ellington, Stan Kenton and Woody Herman, to name a few. During her adolescent years, while moving around the country with her family, Deborah commenced her study of voice and the guitar 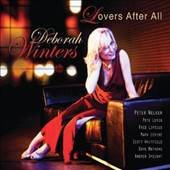 Label: Jazzed Media
Released: 2012
Track listing: Lovers After All; How Am I To Know; Get Out of Town; Body And Soul; I Love Being Here with You; For All We Know; Haunted Heart; The End of a Love Affair; Come Sunday; How Deep Is the Ocean; I'll Close My Eyes.

In his entertaining and impeccably researched book, Sessions with Sinatra (Chicago Review Press, 2004), author Charles Granata details the intricate in-studio mechanics and all-important chemistry behind some of the greatest recorded vocal performances of our time. The unique balance of Frank Sinatra's talent, sophisticated arrangements, great tunes and phenomenal musicians made those recordings classics.On ...

Label: Jazzed Media
Released: 2011
Track listing: Lovers After All; How Am I To Know; Get Out Of Town; Body And Soul; i Love Being Here With You; For All We Know; Haunted Heart; The End Of A Love Affair; Come Sunday; How Deep Is The Ocean; I'll Close My Eyes.

Placing vocalists under a specific, descriptive heading can be limiting in some ways, but it also shines a light on their greatest strengths. Singer Joe Williams--of Count Basie fame--resented being labeled as a “blues singer," since he possessed great range and felt that this tag had suggestions of racism behind it; few would argue, however, that ...

There is a magic in Lovers After All which takes you on a tantalizing musical journey through the exquisite vocal talents of Deborah Winters. She can reach a persons core with her heartfelt renditions on every ballad and will energize you in her upbeat performances as well. In this recording with Arranger/Producer Peter Welker, Deborah brings ...