Spanish vocalist and song-writer Debora Galan has performed on both coasts of the United States as well as in Canada, Mexico, and Spain, covering a variety of genres including Latin, jazz, R & B and contemporary Christian music. Currently residing in San Diego, she performs frequently on the West Coast as a guest vocalist and with her own ensemble, Silk. The group features some of Southern California’s leading musicians. Before moving to San Diego, she began her professional career in Washington, D.C. in Latin jazz and salsa clubs, performing with top-ranked bands and opening for major artists. Galan’s first album as a leader, All About Love (2016) features ten original compositions exploring the various aspects of love, from enchantment to heartbreak

On Wednesday, July 10, genre-busting bassist / composer Christian de Mesones and special guest Debora Galan will bring the slow burn and endless rhythmic possibilities of Latin jazz into the realm of Smooth Jazz—and onto the Blues Alley stage, presenting music from their forthcoming album. Titled They Call Me Big New York, the recording fuses the ...

Album: All About Love
By DEBORA GALáN
Label: Self Produced
Released: 2016
Duration: 04:27 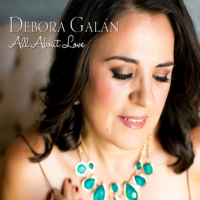 With her album, All About Love, composer and vocalist Debora Galan shares original jazz and pop compositions inspired by her Spanish and Cuban ancestry and her abiding love of melody, rhythm and groove. Aided by Emmy winning and GRAMMY nominated producer and multi-instrumentalist Allan Phillips, she shares a compendium of smooth and tasteful Latin- flavored jazz ...

About Debora GalanThrough performances of the popular Silk band and numerous guest appearances, the voice of R & B/smooth jazz vocalist Debora Galan is becoming widely known. More fans have come on board with the release of her album, All About Love, which shows the depth of her Latin roots. Says the San Diego Troubadour: ...

Label: Self Produced
Released: 2016
Track listing: Unconditional Love; Arms of Love; So This Is Love; I'll Be Here; Lúz Del Sol; Love Sublime; Something's Changed; Letting Go of Me and You; Through the Eyes of a Child; Always Faithful; A Esto Le Llamas Amor.