David Ryshpan is a Canadian pianist, composer and arranger. Beginning his studies in Toronto at the age of 6, his development led him to Montreal where he graduated from the McGill Jazz Performance program. He excelled in his studies and was able to learn first hand from eminent jazz musicians in several cities. He has participated in notable workshops including the 2005 Banff Centre Workshop for Jazz and Creative Music, led by Dave Douglas, the 2006-07 BMI Jazz Composer's Workshop in New York, directed by Jim McNeely and Michael Abene, and the 2007 Red Bull Music Academy in Toronto. These workshops reflect David's diverse accomplishments, from small group improvisation to large ensemble arrangements and compositions to electronic music production 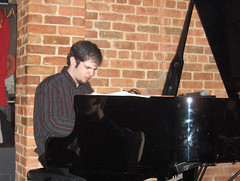 Alicuanta: signifying a quantity or part that does not fit into its larger whole evenly or equally. Alicuanta is a staged song cycle set to the texts of Mexican poet Francisco Serrano, co-composed by pianist David Ryshpan and vocalist Gitanjali Jain Serrano. Through poetry, music, dance and visual elements, Alicuanta is an examination of the memory ...