In addition to her active performing schedule, Dr. Purcell is a sought-after jazz vocal educator and clinician. Dr. Purcell was the Jazz Voice Instructor at the University of Illinois at Urbana-Champaign and founder/director of the University of Illinois Jazz Vocal Ensemble. She is now the founder/director of the Mason Jazz Vocal Ensemble. Her groups have been invited to perform at the New York Voices Jazz Festival, Western Michigan’s Gold Company Jazz Vocal Invitational, the 2012 Jazz Education Network (JEN) conference and the Kansas City Jazz Summit. Dr. Purcell has served on the faculty of the W.O. Smith Music School camp (Nashville), Illinois Summer Youth Music, George Mason Summer Jazz Workshop, National Jazz Workshop and Mason Jazz Camp to name a few. 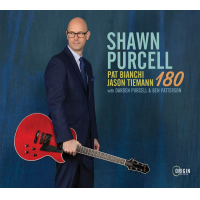 Guitarist Shawn Purcell's latest CD, 180, is all about swinging; Purcell's trio (Pat Bianchi on Hammond B3 organ, Jason Tiemann on drums) nestles squarely into the groove on the double-quick opener, “Cat and Mouse," which sets an upbeat tone for the album as a whole. The rhythm seldom flags on Purcell's sunny compositions ... 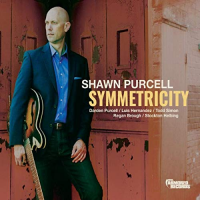 Guitarist Shawn Purcell has enjoyed a busy career with 15 years as a member of the military Big Bands in Washington DC. From 1996-2004, he was the guitarist in the US Air Force premier jazz ensemble, The Airmen of Note. During his time with “The Note," Purcell performed throughout the world, including England, Germany, Turkey, Luxembourg, ... 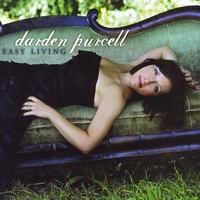 Label: Armored Records
Released: 2017
Track listing: What a Little Moonlight Can Do; Comes Love; Alice in Wonderland; Love for Sale; Will You Still Love Me Tomorrow; Your Red Wagon; Last Night When We Were Young; Get Happy; You Don’t know What Love Is; Ding Dong! The Witch is Dead; Easy Living. 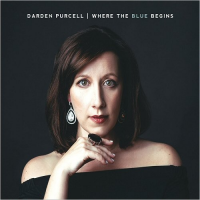 Label: Armored Records
Released: 2017
Track listing: Destination Moon; Moon and Sand; Lullaby of the Leaves; You Stepped Out of a Dream; This Bitter Earth; Old Devil Moon; Darn that Dream; No Moon at All; The Nearness of You; Wrap Your Troubles in Dreams; Weaver of Dreams; Stairway to the Stars.

Working backwards, I discovered DC-area jazz vocalist and educator Darden Purcell with her second recording, Where the Blue Begins (Armored Records, 2016). It was an impressive recital with the nominal theme of twilight winding through its repertoire. While less thematically focused, Easy Living remains a well programmed set of eleven standards, “My Funny Valentine" thankfully not ...

Dr. Darden Purcell waited eight years to record Where the Blue Begins as a follow up to her debut recording Easy Living (Armored Records, 2009). The Dr. part? Yes, well Dr. Darden is the Director of Jazz Studies, Jazz Voice at George Mason University, and holds a doctorate of Musical Arts in Jazz. Her bona fides ...

Label: Armored Records
Released: 2016
Track listing: Destination Moon; Moon and Sand; Lullaby of the Leaves; You Stepped Out of a Dream; This Bitter Earth; Old Devil Moon; Darn that Dream; No Moon at All; The Nearness of You; Wrap Your Troubles in Dreams; Weaver of Dreams; Stairway to the Stars.