Caleb’s vision and accomplishments have marked him as a rising star both domestically and internationally. As the President of Caleb Chapman Music, Caleb oversees the development of over 150 of Utah’s most talented young musicians in eleven elite ensembles, including the Crescent Super Band, which has frequently been hailed as one of the best youth big bands in the world. In 2011, Caleb was named the “John LaPorta International Jazz Educator of the Year”, one of the highest honors in music education. At age 37, he was by far the youngest to ever receive this honor. Caleb’s bands have been featured at many of the world’s most prestigious jazz festivals including North Sea (The Netherlands), Montreux (Switzerland), Vienne (France), Umbria (Italy), and Tuscany (Italy) 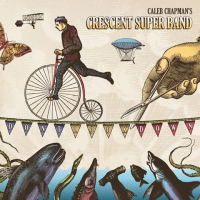