Jeffrey Morgan was born in the U.S.A. in 1954. He started playing violin when he was 10 and later integrated into a youth orchestra. At 19 he was inspired by The Art Ensemble of Chicago and Sun Ra and picked up the saxophone, trumpet, clarinet and started playing the piano as well. During his university studies he organized a Freeform Music Workshop in 1975. A year later he attended the Creative Music Studio in Woodstock, NY, and studied under Karl Berger, Oliver Lake and participated in workshops with Don Cherry. In 1976 he created his first compositional work for music and dance – Distress Mistress, and performed his first ensemble work, The Delirium Dimension 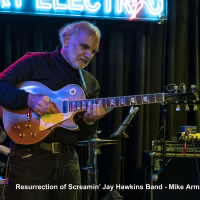