Cozy Cole is considered to be one of the most perfect drummers jazz has produced, possessing an incomparably solid tempo with dreamy clearness and unstoppable power! William Randolph "Cozy" Cole,was a life-long student of the drums, studying at Julliard in the mid-1940s,and with the New York Philharmonic's Saul Goodman. Most of his long career was as a sideman for such leaders as; Willie Bryant, Cab Calloway, Lionel Hampton and Louis Armstrong. Even before these, Cozy had played with Benny Carter's first (and un-successful) band. That band also had such un-known names as Teddy Wilson (piano); Chu Berry (tenor sax) and a young trombonist named Dickie Wells. Almost with complete silence, Cozy broke many of the racial barriers in music

Drummer “Philly" Joe Jones is known as one of the most recorded drummers in jazz history, appearing on more than 200 albums. His legacy as a studio drummer appears on seminal classics like John Coltrane's Blue Train, Thelonious Monk's Blues at the Five Spot, Miles Davis's Milestones, and Bud Powell's Time Waits. Beside these recordings, Jones ...

Meet Ralph J DeLorso Jr:I am a 59 year-old seasoned professional drummer. For 43 years I worked for WM Morris and Willard Alexander. For many years I have performed and recorded with many artists. I have performed with the late Jackie McLean two years before his passing at the Artist Collective in Hartford. I ...

Louis Armstrong & The All Stars: Satchmo At Symphony Hall - The Complete Performances 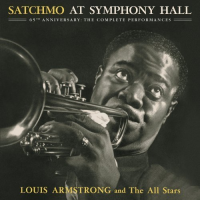 Louis Armstrong & The All StarsSatchmo At Symphony Hall: 65th Anniversary The Complete PerformancesVerve 2012 Writing about trumpeter and singer Louis Armstrong is difficult. In the most literal sense, he is the watershed of jazz. He was neither the first acknowledged genius of the music (soprano saxophonist Sidney ...

This set is expected to be released late May/early June “Almost all of the recordings Hawkins made throughout a 45 year period were outstanding examples of improvisation, but among them were masterpieces by which all jazz tenor saxophone solos will forever be judged.” —John Chilton, The Song Of The Hawk The Coleman Hawkins Set You’ve Been ... 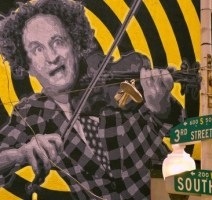 Larry Fine was often shown playing the violin in various The Three Stooges shorts, but what many fans don't realize is that he really played the instrument. Fortunately, he was also interested in jazz and an admirer of Stuff Smith. This long forgotten radio broadcast likely originated from a Hollywood club during one of the recording ...