CINZIA SPATA is regarded as one of the finest jazz vocalists in the world, as well as an innovative composer and lyricist. Now based in New York City, CINZIA SPATA is already a major name in the rich legacy of jazz in Italy, and this year she’s bursting onto the jazz scene in the United States and worldwide with the release of her new CD, “Into the Moment” (Koiné / Dodicilune Records.) Anticipating that she will be one of 2011’s breakout artists, this is indeed her moment. Cinzia’s live performance calendar includes a tour with her current working unit, the CINZIA SPATA QUARTET FEATURING STEVE SWALLOW, with Adam Nussbaum and Giovanni Mazzarino. “Into the Moment” features Cinzia leading a band of jazz all-stars (George Garzone, Bruce Barth, Ken Cervenka, Yoron Israel and Dave Clark) in an exciting mix of original and classic material, including Cinzia’s original lyrics for compositions by Mal Waldron, Bill Evans, Kenny Wheeler and Ralph Towner. Jazz Times Magazine, in a rave review of “Into the Moment,” heralded the CD as one that “should establish her as one of the best singers on the jazz scene,” and went on to note Cinzia’s “superb command of her voice” and that “Spata improvises melodies with spontaneity and ease.” Italy has enjoyed the good fortune of witnessing the first phase of Cinzia’s career, which has included high-profile appearances on Italian television, film, festivals, jazz clubs and concert halls, with the Umbria Jazz Festival, annual appearances at the Villa Celimontana Jazz Festival, and Rome’s top jazz club, Alexanderplatz, among her career highlights. Cinzia’s vocal mastery encompasses a full range from state-of-the-art scat singing to a style of ballad interpretation that has an undeniably cinematic quality

Jazz vocalist CINZIA SPATA, already a major name in the rich legacy of jazz in Italy, is bursting onto the jazz scene in the United States and worldwide with the release of her new CD, “Into the Moment" (Koiné / Dodicilune Records.) Now based in New York City, Cinzia is regarded as one of the finest ...

Cinzia Spata: Into the Moment 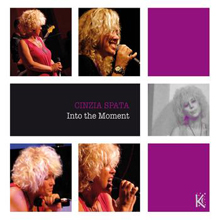 Although Italian singer/lyricist Cinzia Spata has been singing professionally for over 20 years, her discography is pretty sparse. Into The moment is only her third album, and appears six years after 93 03 (Azzurramusic, 2005). The wait's been worth it: the album is a stylish mix of American Songbook classics and lesser-known tunes from some of ...

There is a wealth of jazz talent on 93-03, none less exciting than the singer and the songs. Cinzia Spata recorded pieces that were in her repertoire during the period from 1993 to 2003, hence the title of this release. That apart, Spata has a fine sense of style and articulation which come across potently and ...

With a veritable plethora of jazz singers devoting the majority of their time to endless reinterpretation of the Great American Songbook, it's refreshing to come across someone who, in addition to writing her own mainstream material, chooses to examine less-travelled sources. Italian singer Cinzia Spata may not yet be well known in North America, but by ...