Charlie Harrington is a multitalented drummer whose artistic ability is seemingly limitless. As a bandleader and as a sideman he pushes the boundaries of swing and groove and has garnered critical acclaim for his ability to inspire and entertain. He's known for sophisticated rhythms, distinctive accompaniment, and powerful solos. "...his inimitable antagonistic percussive prodding, coupled with a dazzling display of virtuosic improvisational madness, was breathtaking," writes the San Mateo Daily News.

“A drummer can be one of three things: a technician, an entertainer, or a musician

All About Jazz is celebrating Charlie Harrington's birthday today! A child prodigy, Charlie has played drums since the age of 5 and performed professionally since the age of 15. He studied with and became the protégé of jazz drumming legend Ray Bauduc Charlie later studied with classical percussionist Tim Tull. In addition to leading his own ...

All About Jazz is celebrating Charlie Harrington's birthday today! A child prodigy, Charlie Harrington has played drums since the age of 5 and has performed professionally since the age of 15. He studied with and became the protege of jazz drumming legend Ray Bauduc. Charlie later studied with classical percussionist Tim Tull. In addition to leading ... 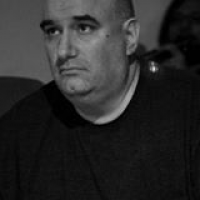 Meet Clay Grossman:Clay Grossman, a mainstay on the Chicago jazz scene for almost four decades, began his professional career at the age of the 19. He has been passing on his sage drum knowledge and wisdom to aspiring students of the drum- set over 20 years. He studied drums with Marshall Thompson and Ian ...

Award-Winning Acclaimed Artist, Charlie Harrington, is now a DrumDial Endorser. He is an in demand session player with a well-established reputation as a first call drummer. Charlie joins, among others, jazz drumming great Peter Erskine in endorsing the DrumDial Precision Drum Tuner. Since it was first introduced over a decade ago, thousands of drummers have been ...

Award-Winning Acclaimed Artist, Charlie Harrington, has accepted an invitation to judge Guitar Center's 2012 Drum Off Competition. Charlie, an active touring and session drummer, is in high demand not only as a performer but as an educator as well. He has shared the stage with jazz legends such as Woody Herman, Freddie Green, Kirk Whalum, Larry ...

Award-Winning Acclaimed Artist, Charlie Harrington, has signed with ProLogix Percussion. Charlie, an in demand session player with a well-established reputation as a first call drummer, is proud to endorse the superior products offered by ProLogix. ProLogix is the revolutionary practice pad manufacturer of the world drumming industry. ProLogix guarantees their practice products to be of higher ...