ABOUT CHARLEY LANGER
Since the release in 2010 of his acclaimed debut album, Never the Same, Charley Langer has kept busy, gigging on the Northern California winery circuit with guitarist Kurt Shiflet and performing in the award-winning tribute band, Steelin’ Dan. Never the Same earned the multi-talented saxophonist a sizeable fan base. Its title track received significant airplay on smooth jazz radio and the Weather Channel. Langer is blazing into 2017 with an exuberantly infectious, playfully grooving new full-length album, Happy Hour. While he refers to the eclectic Never the Same as “an art project with some very hot players,” he has upped his game with radio-ready, urban jazz magic, courtesy of fresh collaboration with guitarist and producer Nils—one of smooth jazz’s top artists and producers. The 10-track collection showcases the saxman’s powerhouse alto on five tracks penned by Nils and five co-written by Langer and Nils 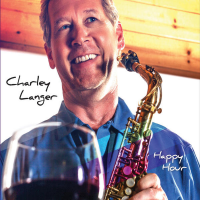 Meet Charley Langer:Intelligent smooth jazz. Think “Phil Woods meets Boney James." So far, the reviews are very positive: “Charley Langer doesn't waste these tracks. If you take the time to listen, each one reveals a different side of his musical personality... What we see here is a jazz musician as jack of all trades, ...