The career of the GRAMMY Award winner Bassist Charles Flores began in Cuba, with the Cuban jazz vocalist/composer Bobby Carcasses. While playing with Carcasses, he was recruited by pianist Emiliano Salvador, one of the key figures in the history of Cuban jazz. For the next three years, he performed throughout Europe and Latin America with Salvador and his quartet. Charles continued his musical career with the Latin-fusion group “Afro-Cuba” during 1992 and 1993 recording a CD titled “Acontecer.” After his stint with Afro-Cuba, he joined the Issac Delgado Group and toured internationally, while with Delgado he recorded three CD’s including “Con Ganas,” “EL Chevere de la Salsa y EL Caballero del Son,” and “EL Año que Viene.” Charles Flores musical creativity and distinct style of playing continues to be demonstrated in his performances with Michel Camilo, Jane Bunnett, Paquito D'rivera, J.P

A World Of Rhythmic Possibilites Dafnis Prieto 276 Pages ISBN: #978-0-692-65526-9 Dafnison Music 2016 Learning to fluently and fluidly dissect, construct, and speak rhythms through the drums is a lifelong process of study, discovery, and growth. Touching on the new while truly expanding that coded language is incredibly ... 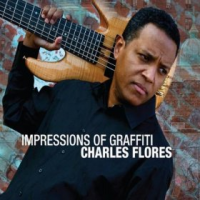 Reared and educated in Cuba, bassist Charles Flores migrated to the US and evolved into a first-call session artist for saxophonist David Sanchez and flautist Dave Valentine among many others. Sadly, Flores' debut solo endeavor is a posthumous release as he succumbed to cancer on August 22, 2012. Yet it's a luminous testament to his holistic ...

No album should ever serve as a debut and a posthumously-released pièce de résistance, but such is the case with bassist Charles Flores' Impressions Of Graffiti. At the age of 40, the Grammy Award-winning bassist, who spent time working with pianist Michel Camilo, trumpeter Brian Lynch, reed master Paquito D'Rivera, drummer Dafnis Prieto, and numerous other ...

Charles Flores, a Grammy-winning jazz bassist who was born in Cuba but made his home in Hartford for more than two decades, died Wednesday at age 41. The cause was complications related to throat cancer, according to bandleader and composer Michel Camilo, who performed with Flores and counted him as a close friend. Flores had an ...