Michael Dorf Presents The Music of Van Morrison Carnegie Hall New York, NY March 21, 2019 “I know he doesn't like this version, but I'm thanking him anyway," so stated a sly Patti Smith at New York City's Carnegie hall before launching into her classic version of Van Morrison's anthem “Gloria" ...

Andy Firth started his performance career at the age of 14 when he appeared around South Australia featuring in small groups and big bands. By 17 Andy had moved to Adelaide and co-founded his first band The BBC Trio and later the BBC Quartet, Andy Firth’s reputation as one of Australia’s most outstanding jazz talents was further endorsed with his appearances on ABC, channel 7,9 and 10 television shows, The Burrows Collection, Sunday, Hey, Hey it’s Saturday, Clive Robertson’s News World and The Midday Show with Ray Martin. Today, Andy Firth is widely regarded as one of the most outstanding clarinet players in the world, having played internationally with some of the greatest performers, bands and orchestras in both classical and jazz music 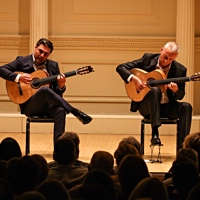 Internationally renowned guitarists from Montenegro, Srdjan Bulatović and Darko Nikčević return to jny: New York City and Carnegie Hall on October 25 in a concert produced by LeitmotivArts. The duo has performed for both national and international audiences for more than 25 years, presenting their original pieces invoking the “languages" of classical and flamenco guitar. While ...

Guitar Duo From Montnegro In Carnegie Hall on October 18th 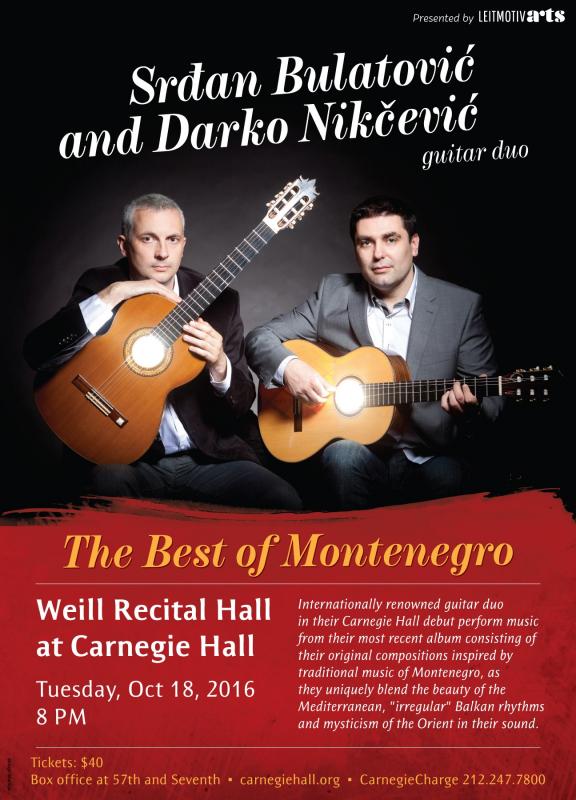 Guitar duo Bulatović-Nikčević from Montenegro will have its Carnegie Hall debut on October 18th, presented by LeitmotivArts Renowned guitarists from Montenegro, Srjdan Bulatović and Darko Nikčević will have their New York debut at world famous Carnegie Hall on October 18, 2016, in a concert organized by LeitmotivArts . They will perform original compositions from their new ...

Don Shire's club-hopping habit started in Pittsburgh, but his introduction to the capital of jazz was a 1971 Freddie Hubbard gig at New York jazz institution, the Village Vanguard. And he's still going strong 45 years later. One concert particularly stands out. “When it was over, the people just looked at each other. The feeling was, ...

Dimitrije Vasiljevic masterful jazz pianist showcases engaging and meditative compositions in his solo debut at Carnegie Hall in jny: New York on March 24, 2014 at 8pm. Vasiljevic is an award-winning (Montreux Jazz Festival), New York-based jazz pianist and composer whose “iridescent and captivating music” (All About Jazz) weaves Balkan motifs into the subtle flavors of ...