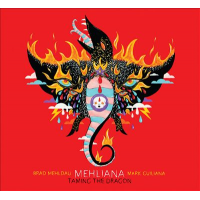 Whilst synthesizer-driven ambient groove music seems like a left-field move, nothing pianist/composer Brad Mehldau does should surprise anymore. The piano trio releases of Mehldau's first recording decade established his reputation as the most influential jazz pianist since Keith Jarrett. The brilliant, emotionally intense Elegiac Cycle (Warner Bros. Records, 1999) marked a significant departure from his previous ...

First impressions shouldn't necessarily be the lasting ones. Despite, according to the press sheet, having played together for several years, über-pianist Brad Mehldau and drummer Mark Guiliana only began touring as Mehliana in 2013, and one of the heavily electronic duo's early performances at the 40th Vossa Jazz Festival in Voss, Norway was, sadly, eminently forgettable. ...