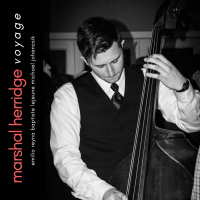 Chapter One, the debut recording from bassist Marshal Herridge, showcases his admirable Montreal-based quartet performing nine of the leader's bright and limber compositions and arrangements. Besides keeping splendid time (his sonorous bass is recorded so prominently that not a beat is missed or undervalued), Herridge solos eloquently in the manner of his musical heroes, Paul Chambers ...