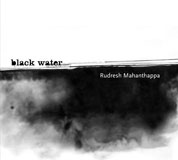 Label: Red Giant Records
Released: 2002
Track listing: Balancing Act; I Like It When You Play the Blues; Viraha; What's a Jazz?; Rejoice; Simonize; Joe Made the Face; Are There Clouds in India?; The Crossing; Faith (Intro); Faith.

Officially, Black Water is the second album by alto saxophonist and composer Rudresh Mahanthappa. ( The Preserver, a blazing follow-up to 1997's Yatra, remains in the can.) Commissioned by the American Composers Forum, this powerful suite deals in part with the difficulty of immigration, not only for those who make the journey but also their progeny ...