Kelly, Bev (Beverly Wolfe Kelly), vocalist, composer, vocal coach; b. Rittman, Ohio, 18 June 1934. She grew up in Troy, Ohio. Her father was Donald W. Wolfe, (1914-1984) and her mother was Dora Ruble Wolfe, (1915-1983). Her brother is Bill, b. 1938. At the age of five, she began studying classical piano, which she continued through high school. At age fourteen, she began studying classical voice, which culminated into a four-year vocal scholarship at the Cincinnati Conservatory of Music. While at the Conservatory, Bev began her professional singing career with the Teddy Raymore Trio. The trio performed not only jazz, but comedy, show tunes and popular music, an invaluable learning experience, giving Bev a solid background in show business. After the birth of her first son, Greg in 1954, Bev teamed up with gifted pianist, Pat Moran

Bev Kelly: From the Heart

A couple of days ago I heard from singer Bev Kelly. If you're unfamiliar with Bev, dig my two-part interview with her from 2013 (here and here). In the 1950s, Bev was one of the hippest jazz vocalists in Chicago's bevy of hotel clubs and lounges. She recorded quite a few important albums, including several with ...

Few singers curl up on a song's lap like Bev Kelly. In the '50s she worked clubs and recorded several albums with pianist Pat Moran. She also recorded her first solo album in 1957. But just as she had attracted the attention of personal manager John Levy, Bev had a choice to make—her career or her ...

With the proliferation of travel in the 1950s, Chicago became a hotbed for jazz-pop singers and singing groups. The city was a national railroad hub, and passengers arriving from the East, West and South needed places to stay. As the number of hotels in Chicago grew, so did the number of hotel lounges and clubs and ...

Live At The Jazz Safari 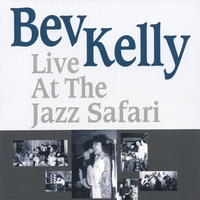 Bev Kelly’s second album for Riverside is a contrast in every way. Her first, Love Locked Out, was a meticulous studio date in New York, lesser-known songs (“Lonelyville”, “Weak for the Man”) by a stellar cast (Burrell, Edison, Hinton). This was live at San Francisco’s Coffee Gallery (does thatOne other thing you notice: Bev has changed ...