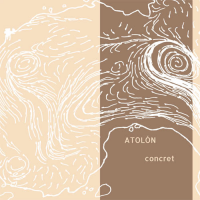 Atolón is a Barcelona trio consisting of Ferran Fages and Alfredo Costa Monteiro--who, as a duo, are known as Cremaster--plus trumpeter Ruth Barberán. The single 35- minute track was recorded at Can Felipa, in Barcelona, in January 2011. Although recorded by Another Timbre proprietor Simon Reynell, the album is actually released on the St. Petersburg-based Intonema, ...