Arnaud Guichard is a Belgian born saxophonist and composer based in London. Since he arrived in the UK in 2013, Arnaud performed as a sideman and as a leader with the renowned jazz musicians Zoe Rahman, Mark Lockheart, Simon Purcell, Mick Foster, Dave Wickins and Moses Boyd. Arnaud studied at Trinity Laban Conservatoire where he was awarded the Jon Hassal prize for jazz in 2015 before graduating in 2016. His latest work as a bandleader ‘Serendip’ is a project that reflects Arnaud’s early influences from the ‘Symphony Fantastique’ by Berlioz. ‘Serendip’ cultivates the essence of program music using the Persian tale ‘The Three Princes of Serendip’ as an extra-musical narrative. Since its start in 2017 ‘Serendip’ played at Jazz in The Round, The Vortex Jazz Club, Jazz Live at The crypt amongst others and released its first album ‘The Tale’ at Total Refreshment Centre in May 2018

Label: Self Produced
Released: 2021
Track listing: I Am Just A Little Girl With A Dream; Fighting My Own Demons; Born To Be Free; Dancing My Desires; They Call Me The Queen Of Fire.

This is the second album from Belgian tenor saxophonist Arnaud Guichard's Serendip Quartet. The first, The Tale (Impeka, 2018), received a deserved four-star review on All About Jazz, and Queen Of Fire is just as good, if not better. The first album's singular intersection of Ben Webster and mild hallucinogenics is still there to be savoured, ... 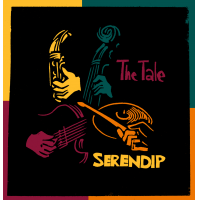 The group Serendip has a common jazz ensemble format: saxophone/guitar/bass/drums. But the music they make is anything but common. With The Tale--music that takes its inspiration from the ancient Persian story The Three Princes of Serendip--Belgian-born and now London-based tenor saxophonist Arnaud Guichard has sculpted a compelling spiritual narrative for his quartet. The disc ...