Andy Milne and Gregoire Maret are a groundbreaking duo, made of rising harmonica star Gregoire Maret, who has played with everyone from Pat Metheny and Jimmy Scott to George Benson and Cassandra Wilson, and pianist Andy Milne, one of the most talented musicians to emerge from Steve Coleman's M-Base collective. Grégoire Maret Before he even hit 30 years of age, Grégoire Maret became the most sought after harmonica player behind legends Toots Thielemans and Stevie Wonder. Influenced by both, Maret has managed to find his own voice on the instrument. His capability to play almost anything has created a steady flow of collaboration with musicians from the jazz, pop, rock, funk & R&B worlds, who call upon Maret's mastery to add his unique sound. Born May 13, 1975 in Geneva, Switzerland to a Swiss father and American mother, Maret began his musical career as a harmonica player at age 17 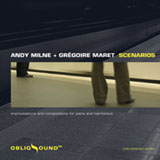 By Andy Milne and Gregoire Maret

"[Albums are] like a trailer to the movie... a CD is really a mini-series, declares Canadian pianist/keyboardist Andy Milne. Similar analogies with the Seventh Art are common when it comes time to define and characterize music. On the aptly-titled Scenarios, Milne offers, aided by harmonicist and longtime collaborator Grégoire Maret, a more pictorial approach to musical ...