Montreal born drummer, Andrew Kushnir first came onto the Canadian Music scene when he joined the acclaimed Franco Proietti Morph-Tet at the age of 17 as a DJ/Turntablist. With the Morph-tet , Andrew went on to record 3 albums (Morphology, Like The Shore is to The Ocean, and Live at St. Ambroise) and play many of the major Canadian music festivals such as the Fringe Festival, The St. Ambroise Funk N’ Jazz Festival, and The Quebec City Jazz Fest. During this time Andrew also produced and worked with Grammy nominated Canadian MC Jonathan Emile. While playing with the Morph-tet, Andrew Kushnir began studying the drums with celebrated Canadian Jazz Drummers Jim Doxas and Michel Berthiaume 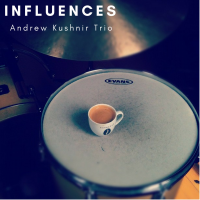 Label: Independent
Released: 2018
Track listing: We See; Prospect of Love; Why Don't I; Migrations; Bu; When I Get There.

Judging from the album cover, a coffee-filled cup on a drum, one might anticipate that drummer Andrew Kushnir's debut album, Influences, would be a hard charging affair. And Kushnir and his trio (Ryan Slatko on piano and Rick Rosato on bass) do not disappoint. The trio offers up some head-bobbing jazz at its finest.

About Andrew Kushnir Montreal born drummer,Andrew Kushnir first came onto the Canadian Music scene when he joined the acclaimed Franco Proietti Morph-Tet at the age of 17 as a DJ/Turntablist. With the Morph-tet , Andrew went on to record three albums (Morphology, Like The Shore is to The Ocean, and Live at St. Ambroise) ...