The most popular vocalist in Britain during the 1930s, Al Bowlly showcased a range of material unsurpassed by any contemporary other than Bing Crosby. He was also a true international recording artist: born in Mozambique to Greek and Lebanese parents, he was raised in Johannesburg, but gained his musical experience singing for a dance band led by Jimmy Liquime in India and Singapore during the mid-'20s. Just one year after his 1927 debut recording date in Berlin, Bowlly arrived in London for the first time, as part of Fred Elizalde's orchestra. That year, "If I Had You" became one of the first popular songs by an English jazz band to become renowned in America as well, and Bowlly had gone out on his own by the dawn of the '30s. During the next three years, he recorded over 500 songs and appeared with orchestras led by Ray Noble and Lew Stone 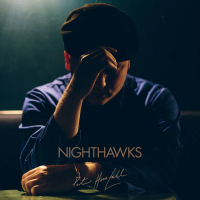 The title of Peter Horsfall's Nighthawks may call to mind the iconic Edward Hopper painting, or maybe Tom Waits' Hopper-inspired Nighthawks At The Diner (Asylum, 1975). A few bars into “Nighthawks" it becomes obvious that Horsfall and Waits both take inspiration from the painting ("Nighthawks lead a lonely life...")--but Horsfall's melancholy vocal stands in sharp contrast ...

Meet Tony Vitti: In 2008, I was a singer in a metal band, but I decided to play jazz and blues in 2012, after some tours, some scenes. Instrument(s): I'm a singer, even if I play guitar, I sing, sing and sing again. Teachers and/or influences?

Time On My Hands