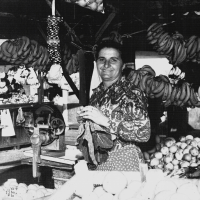 Label: Robalo Jazz
Released: 2021
Track listing: As she swings, as a po(o)p song; Tomate com óculos; Wishing; Freefall; Hover it; Here she comes; Pow; The first time I sang you

As she swings, as po(o)p song

Paulo Santo is a Portuguese vibraphonist who was born in Leiria in 1985. He started playing drums at age 12. Over time the music became his principal interest. In 2000 he studied classical percussion in Conservatório of Leiria and started to attend some classes of improvisation. Later started studying with Carlos Barreto in the jazz school of Hot Club Portugal and begun to dedicated exclusively to the vibraphone. Throughout his learning, he highlights the musicians Afonso Pais, André Fernandes, Jeffery Davis, Vasco Mendonça, João Moreira, Nelson Cascais, Pedro Moreira, Stefon Harris and Steve Nelson