Pronounced "prodigious" by the late Leonard Feather, and "a monster" by Tutti Heath, Bozeman ,MT native Adam Platt began playing piano at the age of four. The recipient of several awards growing up; including multiple DownBeat Magazine's student music awards, and twice winning the High School Piano division at the Lionel Hampton Jazz Festival, Adam first won this competition when he was just 10 years old, the youngest winner ever. Between age eleven and fourteen, Adam was also selected to be the pianist for Montana State University's jazz band. Two years later, at the age of twelve, Adam was invited back by Lionel Hampton to be a guest artistat his Jazz Festival. After studying at New England Conservatory and Berklee College of Music, Adam moved to NYC. Adam has performed/recorded with Lionel Hampton, Tessa Souter, Candido, Matt Wilson, Lauryn Hill, Reggie Watts, DJ Spooky, Brian Bromberg, Kelly Roberti, Dana Leong, and Om'mas Keith

Picture in Black and White

Label: Noa Records
Released: 2018
Track listing: Kothbiro; Ayub Ogada; Contemplation (Ancestors); A Taste of Honey; Dancing Girl/Where the Streets Have No Name; Ana Maria’s Song; Child of Love; Picture in Black and White; You Don’t Have to Believe; Reynardine; Siren Song; Lonely Woman; Nothing Will Be As It Was. 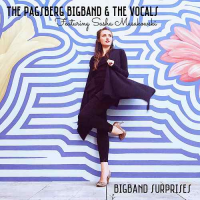 Lucia Jackson You and the Night and the Music Roni Music 2018 To a precious few, much talent is given, particularly the young of age, like New York City —native Lucia Jackson, who, at the age of 26 has already distinguished herself as an accomplished dancer and model. Now Jackson emerges ...

New York-based vocalist Tessa Souter is becoming treasured among jazz fans and musicians alike. Equally effective in clubs, in concert and on her several fine recordings, she combines the sonority, vocal range and discipline of a classical contralto with subtle and sultry jazz inflections. Everything she sings is well thought out and in good taste. She ...