Born in England in 1974, Adam was raised in Canberra, Australia. He studied Jazz Performance at the Canberra School of Music receiving a Bachelor of Music there in 1995. His studies have also included time in New York with Ralph Alessi, Mark Turner, Mark Helias and Barry Harris. Starting on tenor saxophone, he was originally inspired by bebop and straight-ahead jazz. His interest was soon piqued however by contemporary innovators including Steve Coleman and Dave Holland and he made a study of their music. Arriving in London in early 1998 he quickly became involved with many of the finest musicians in London also adding soprano saxophone and bass clarinet to his repertoire. Adam has performed and recorded as a sideman with: Tomorrow's Warriors, Polar Bear, Jazz Jamaica All Stars, Larry Bartley Septet, Sheron Wray’s Jazz Xchange, Stefano Kalonaris, Roberto Pla's Latin Jazz Ensemble, the London Jazz Orchestra, Synergy, Jonathan Bratoëff Quintet, NYJO, The Mike Nock Quintet, The Rat Pack Orchestra and the RTE Concert Orchestra and Big Band. 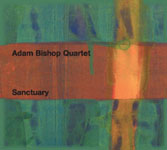 A gorgeously lyrical tenor saxophonist, Adam Bishop has emerged from the sideman shadows with the most assured and compelling British jazz album to be released so far this year. He's in the company of three other young London tyros: vibraphonist Jim Hart, bassist Larry Bartley and drummer Shaney Forbes. On Sanctuary the quartet play supple, melodically ...