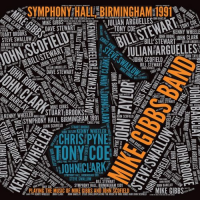 This kind of album only appears once in a blue moon and is a near-perfect recording of a concert, in mixing desk quality stereo, that took place at Birmingham's Symphony Hall on Friday 18 October 1991. It boasted a starry line-up of British and American virtuosos including Kenny Wheeler, John Taylor and Tony Coe from the UK and Steve Swallow, Bill Stewart and, of course, John Scofield from the USA. Mike Gibbs, born and raised in Zimbabwe but a resident of Britain for years, is a sort of peripatetic bandleader, happily utilising orchestras from all over the globe. They, in turn, are more than happy to play his imaginative scores. Gibbs began making waves as far back as 1970 with his eponymously titled debut album for Deram which typecast him to some extend as a jazz rocker; in fairness, it did sport Cream's Jack Bruce on bass guitar. This was consolidated by Tanglewood '63 (GRP Records). But by his third album Just Ahead (BGO Records, 1978) it was already clear that Gibbs was a major force in big band jazz. However, his compositions had been noticed (and recorded) years earlier by Gary Burton, his old comrade from Berklee. They later recorded a big band album together, In The Public Interest (Polydor, 1974), which shamefully, has not yet received a CD reissue.

The two set openers pair Scofield's brilliant, "Lost In Space" and the title track of his 1991 album "Meant To Be." Scofield evinces a typically sinewy solo on the former but is more restrained on the latter which, rich in lyrical poignancy, gradually gathers an ensemble momentum. Gibbs's "Roses Are Red" is replete with his trademark fanfare heavy brass arrangements but concludes with a trio passage for tenor saxophone, piano and guitar. Scofield's lengthy composition "Gill B643" comprises a robust arrangement of a dark bass vamp and memorable ensemble sections. It also benefits from Scofield's muscular contribution and an exuberant solo from Kenny Wheeler. "Don't Overdo It" is Gibbs's paean to the swinging big band era with just a hint of numbers such as "I'm Beginning To See The Light." Scofield endorses the pastiche by opening his solo with a brief quote from "St Thomas." Solos from Bill Stewart and Chris Pyne culminate in a crescendo of squealing high register horns.

On Scofield's "Pretty Out" Kenny Wheeler's trumpet soars high into the stratosphere and John Taylor renders an extraordinarily abstruse yet equally compelling piano solo. The finale is Scofield's exhilarating "Fat Lip," with the guitarist pulling out all the stops with a number that recalls George Russell at his funkiest. Whilst Gibbs provides the tonal and harmonic colour to these illustrious big band arrangements, Scofield, another Berklee alumnus, adds a perfect complement of raw, uncompromising guitar. This magnificent double CD, a glorious memento of an Arts Council / Contemporary Music Network sponsored 12 date UK tour, recalls an international musical event that sadly we witness less frequently in these austere times.

CD 1: Lost in Space; Meant To Be; Roses Are Red; Gill B643; Don’t Overdo It; Out Of The Question. CD 2: Pretty Out; Blueprint; Science and Religion; A World Without; Fat Lip.