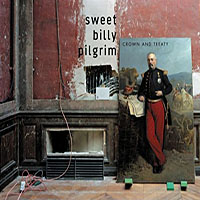 Leaping onto the scene overnight might appear to have its advantages, but there are plenty of disadvantages, too. Building an audience incrementally, over a period of time, often allows an artist to evolve without the same degree of mass expectation that comes from instant stardom. Sweet Billy Pilgrim's We Just Did What Happened and No One Came (2005), may have been released independently on the group's own Luxor Purchase label, following the similarly independent EP, Stars Spill Out of Cups (2003), but it garnered not just attention from key critics (including Mojo, BBC's Fiona Talkington and The Sunday Times), but from musicians as well. An invitation from David Sylvian to remix "The Heart Knows Better"—from his collaboration with avant-guitarist Derek Bailey, Blemish (SamadhiSound, 2003)- -for the experimental British singer/songwriter's 2005 remix album, The Good Son vs. The Only Daughter (SamadhiSound), led to the release of SBP's Twice Born Men on Sylvian's label in 2009. The additional visibility—not to mention a second album that managed to transcend the "sophomore effort stigma" and both build on and improve upon the debut's direct yet compelling unpredictability—led to even more significant attention in the UK, including a nomination for the coveted Mercury Prize.

Twice Born Men didn't get the prize, but sometimes a nomination can actually be better than a win, and on the strength of that album and its Mercury nod, Sweet Billy Pilgrim began to tour more, including a 2009 run with Portico Quartet, and a marvelous date at Enjoy Jazz's one-day Punkt Festival in Mannheim, Germany, following an equally fine show at Punkt Central in Kristiansand, Norway. Crown and Treaty is, not surprisingly, another collection of superb songs from SBP's writer, Tim Elsenberg, but it represents further growth for this thinking person's pop group.

Few songwriters possess Elsenberg's way with words, and he wastes no time demonstrating his astute observational abilities and linguistic panache in the power-pop opener (and first single), "Joyful Reunion." Who but Elsenberg would rhyme "You start in a city far beyond the reach of memory" with "Where I was the word breaking out of the parentheses"? And elsewhere, on "Arrived at Upside Down," who but Elsenberg could find an observation few would make yet seems so blatantly obvious, "Life is a place we arrive at upside down"?

Yet as abstruse as Elsenberg's writing can sometimes be, and as dark as he invariably is, a self-admitted melancholic (despite, in performance, being both witty and engaging with his audience; the group's between-song patter more like a few lads at the local pub), there's sometimes hope:

Stylistically, Sweet Billy Pilgrim's purview continues to run far and wide, but on Crown and Treaty, Elsenberg's multifarious interests have coalesced even more successfully. The singer/songwriters's love of folk-centric heroes like Richard Thompson can be found throughout Crown and Treaty, from the finger-picked guitar, banjo and harmonium of "Shadow Captain" to Crown and Treaty's slow-building, anthemic closer, "Blue Sky Falls." Elsewhere, on the irregularly metered "Archaeology," Elsenberg's interlocking, arpeggiated guitar parts suggest 1980s-era King Crimson, but subsumed in a larger, funkier pulse and, ultimately, an instantly memorable chorus that has simply never been found in any incarnation of guitarist Robert Fripps flagship art-rock group.

If Elsenberg has taken anything from progressive rock historically, it's been an ability to write episodic songs that cover a lot of territory in just a few short minutes— though he's always managed to avoid gravitas or excess through careful construction and a greater reliance on the words and how they music can best serve them. Compositionally, Crown and Treaty may be the most direct music Sweet Billy Pilgrim has delivered to date, with some of its most visceral grooves, thanks to drummer Alistair Hamer ("Kracklite," "Shadow Captain"), and a new voice in relatively recent Sweet Billy Pilgrim recruit, Jana Carpenter, to occasionally act as foil to Elsenberg's rich tone and unmistakable vibrato ("Shadow Captain"), while fleshing out his often layered harmonies throughout.

The reviews are already pouring in, with high praise from Mojo ("Instant Classic"), Q Magazine, The Guardian, The Observer and others; add one more to the list of publications that are rating this as one of the best pop albums of 2012. Back to independent release on the Luxor Purchase imprint, but with the greater distribution and marketing push of EMI, Crown and Treaty may well be the breakthrough record that pushes Sweet Billy Pilgrim into the greater limelight it's deserved from the very beginning but for which it's finally ready, the result of incremental growth and an enthusiastic audience of fans, critics and musicians alike.