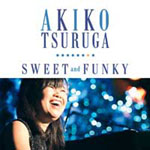 Get down, watch out and dig what pours forth from the Hammond B3 organ as played by Akiko Tsuruga. The possessor of a million dollar smile and a stage presence that makes one glad to be in the audience, Tsuruga is a killer player.

Sweet and Funky is a pure mainstream release representing the organ trio tradition that is steeped in the blues and swings like crazy. Together with her band mates, guitarist Eric Johnson and drummer Vincent Ector (along with percussionist Wilson "Chembo" Corniel), Tsuruga plays four standards, two older pop tunes and four originals.

Having been fortunate enough to see her live (playing behind Lou Donaldson), the evidence is clear that Tsuruga is even hotter in person than what is laid down on the record. When fronting her own band, she positively melts the stage.

Given this observation, Sweet and Funky will raise the neck hairs on anyone who likes the traditional organ trio sound of Jack McDuff and Jimmy McGriff, or for that matter, Jimmy Smith and Dr. Lonnie Smith. This is feel good music with nothing fancy, but which should not be confused with smooth jazz.

The single most distinctive thing about any particular jazz performance, live or recorded, is that it captures and maintains the interest of the listener. Despite being traditional, the music connects directly and everyone's personalities come shining through.

Johnson fits right into the groovy pocket that Tsuruga's bass lines and Ector's drums set up, which is not surprising since he broke into jazz at age eighteen by playing with McGriff and McDuff. He knows this territory and really digs in.

Tsuruga was encouraged to move to New York City by Grady Tate when he encountered her in Japan, and has become a very in demand player since arriving in the States.

For anyone who wants to know what "funky" sounds like, look no further than Akiko Tsuruga on Sweet and Funky and get ready to say, "Damn!

Meanie Queen; DLG; Sweet And Lovely; Stormy Weather; Saving All My Love For You; Where Is The Love; Polka Dots And Moonbeams; Mushi-Mushi; Booga-Lou; Broadway.