Glen Phillips: Swallowed by the New

By DOUG COLLETTE
November 5, 2016
Sign in to view read count 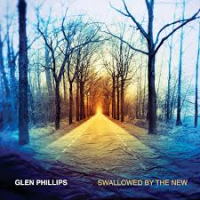 It's not wholly fair to say Glen Phillips' is the sound of Toad the We Sprocket (with whom he still works when not going solo). But it was usually his insinuating voice and engaging way with words that shaped the group's sound and those virtues are readily apparent on this exotic sounding record Swallowed by the New.

The title of the album suits its vivid music as much as the cover graphics, which go unbesmirched by the printing of the lyrics (otherwise present on the artist's website). Words to those of songs such as "Go" suggest this as a song cycle of sorts and right from that opener's alternately eerie and comforting tones, there's clearly a story here. "Leaving Oldtown," and even more so "There's Always More" the haunting the latter quality woven in via Amber Rubarth's vocals, reaffirm that impression, while the ever-so-brief, jaunty conclusion of "Reconstructing the Diary," also helps implant the logic of a personal journal to these eleven tracks (even if the listener isn't aware of the man's recent divorce as reference in some coverage of this release).

At the same time, the comparatively conventional sounds of soft guitars, bass and drums, contrasted with the strings from The Section Quartet on a cut like the cryptically-titled "Baptistina," nurture a subdued but nevertheless palpable dynamic range. And lest it seem like Phillips is taking too precious an approach with such baroque arrangements, touches such as the slowly twisting electric guitar solo of Chris Bruce's on "Criminal Career" maintain a pointed clarity. "Held Up" conjures a similar lucidity with its chain-gang like chant, shot through with his jagged fretboard chords and fills.

The production and engineering by (bassist) Paul Bryan, the mixing by Pete Min and the mastering by Kim Rosen all deserve much recognition for preserving such nuances in these recordings. The virtues of a recorded performance like "Unwritten" may not exactly leap out at a listener, but that doesn't marginalize that sonic attention to detail these three technically-oriented participants maintain throughout this project. In fact, the varied sonic textures of Swallowed by the New constitute its main attributes besides Glen Phillips' thought-provoking lyrics, particularly as each set of characteristics mirrors the other.

In fact, the simplicity in the arrangement of "The Easy Ones," grounded in acoustic guitar and tempered percussion, mirrors the quiet sense of purpose within the words of "Grief and Praise," almost as much, in fact, as its open introspection and positivism. Similarly, the insistence within Jay Bellerose's four-square drumming on "Amnesty" denotes the resolute attitude within these songs, the cumulative effect of which makes for one of 2016's a most memorable pieces of work.