By Geno Thackara
October 12, 2016
Sign in to view read count 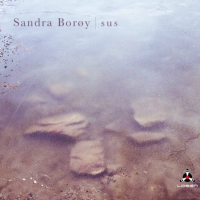 Falling somewhere between lush indie folk and chamber jazz with a lounge feel (the non-cheesy kind, that is), Sandra Borøy introduces herself as anything but predictable. She opens her debut Sus with a series of floating guitar chords and wordless singing that drifts out of the clouds. The ethereal quality never goes away throughout; the album seems to be about creating a pure dreamy atmosphere as much as anything else, especially if you don't understand the Norwegian lyrics. At the same time there's a deliberation to the compositions that shows it's not quite as aimless as it sometimes sounds.

For the most part the music is centered around Borøy's clear alto and Dyrstad Valberg's ringing guitar. In spots like "Ny Tråd" or "Udefinert" the quartet veers closest to something recognizable as jazz, perhaps the kind you'd hear at a Scandinavian beachside cantina, if such places exist. Her weaving melodies and unpredictable chord progressions give the ears an interesting path to follow even while the loping drum pulse keeps the toes occupied.

For the most part the pieces are less rhythmic than that, based around simple circular guitar patterns, leisurely strums and vocal workouts of a kind that's more mild than wild. A couple sketches are reprised, which actually tug the album in different directions: the title tracks add to the lush feel with the disc's loosest ambient moments, while the jarring "Jiffy" pieces break up the flow with abstract rattles and percussion. If they throw off the overall cohesion a bit, we can put that down to first-album growing pains. The remainder of Sus easily overcomes it and offers a free-spirited listen for anyone tired of being tethered to the earth for the time being.