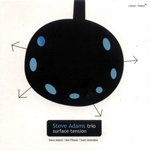 Steve Adams is best-known as a long-term member of the San Francisco Bay Area-based Rova saxophone quartet. Over the past three decades Rova has become a highly respected institution, courtesy of an impressive range of collaborative projects, from work with the Kronos Quartet and pianist Satoko Fujii to multi-media efforts like "Glass Head."

Membership in an intensely focused partnership like Rova has obvious benefits, and while Adams' two decade long tenure with the group has yielded incredible opportunities, it has also limited his solo output. Other than a few duo recordings with contrabassist Ken Filiano and multi-instrumentalist Vinny Golia, his own discography has been relatively sparse. Surface Tension, then, is a welcome glimpse into Adams' personal aesthetic.

Adams is joined by Filiano and drummer Scott Amendola on this rare trio recording—a varied studio set that veers from the austere to the coruscating. Like-minded peers in the adventurous West Coast scene, Filiano and Amendola reveal a deep-seated rapport with Adams that lends a conversational air to their interactions. Whether navigating freely improvised or fully notated compositions, their congenial interplay sounds inspired and effortless.

Alternating horns throughout the session, Adams unveils a range of sonorities and timbres culled from a variety of woodwinds, from sopranino saxophone to bass flute. Each instrument is used to excellent effect in contrasting contexts, weaving a diverse and texturally rich mosaic of sound.

His bold baritone saxophone cuts a deep swath through Filiano and Amendola's pneumatic downbeats on "The Another Form in Time Voice" and "Equilibria," ratcheting up the energy level with brash, muscular flurries. Filiano exceeds his requisite role as timekeeper and harmonic anchor, plying sinuous arco glissandi on "Upper and Lower Partials," and unleashing a percolating salvo of ebullient pizzicato on "Squeamish" and "Squelch." Amendola's crisp rhythms and steady cymbal accents keep the trio focused, whether navigating the oblique contours of "Equilibria" or shading the atmospheric "Little Ballad" with gossamer washes.

Adams' introspective side is revealed on the bass flute driven numbers "Upper and Lower Partials," "Little Ballad" and the spectral title track. Unfurling at a glacial pace, these meditative Asiatic tone poems brim with hushed tones, resonant bass harmonics and scintillating cymbal accents. The album is not limited to this dynamic chiaroscuro however. "Squeamish" is a funky, abstract post-bop vehicle for Adams' soulful tenor and "Squelch" is a conventional swinger replete with traditional chord changes. Alternating between sopranino and baritone, Adams elicits a squall of dissonant multiphonics and expressive cries on "Cacophony (for Vinny Golia)," ending the album with a churning vortex of blistering energy in tribute to the legendary West Coast scene leader.

Surface Tension is a rarified view into the mind of one of the West Coast's most admired ensemble members. Considering Adams' limited discography outside of Rova, makes this session all the more valuable.