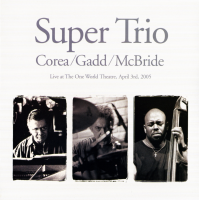 He may be in his mid-sixties, but pianist Chick Corea hasn't slowed down in the least. In the past five years there's been a monumental three-week run at New York's Blue Note, focusing a bright light on acoustic ensembles past and present and beautifully documented on the ten-DVD set Rendezvous in New York (Image Entertainment, 2005). Corea re-formed his powerhouse Elektric Band for an album—To the Stars (Stretch, 2004)—and tour. He reunited with members of Paco de Lucia's band for a tour documented on the double live CD Rhumba Flamenco (Chick Corea Productions, 2005), available only at shows and on Corea's website. The Ultimate Adventure (Stretch, 2006) hearkened back to the days of high concept albums like My Spanish Heart (Polydor, 1976) without sounding the least bit retro.

Why Super Trio is only being released in Japan is a mystery. This live set revisits material from Now He Sings, Now He Sobs (Solid State, 1968), Light as a Feather (Polydor, 1972), The Mad Hatter (Polydor, 1978), Friends (Polydor, 1978) and Three Quartets (Warner Brothers, 1981), focusing as much on Corea the composer as Corea the pianist. In the same way that recent trios led by guitarist Pat Metheny have drawn from a broad cross-section of writing from his entire repertoire, Super Trio is a reminder of how many memorable tunes Corea has written—many still becoming part of the collective musical unconscious.

Still, it's not as if the trio doesn't exercise broad liberty with the material. Take the open-ended version of "Matrix," one of Corea's earliest compositions, for example. Bassist Christian McBride's opening solo, free though it may be, insidiously alludes to the familiar theme without giving away the store. Corea and drummer Steve Gadd join in on the free play; while Corea may have for the most part left the more obfuscated cerebralism of his pre-Return to Forever group Circle behind, it's still part of his vernacular. The trio takes its time, stretching the source material every which way, never completely coalescing for the melody—instead, dancing around it for nearly fourteen minutes and proving just how malleable Corea's writing can be.

Elsewhere the trio's approach is more straightforward, but a playful exuberance makes the hard-swinging "Humpty Dumpty" and the more relaxed "The One Step" and "Windows" proof that the traditional format of head-solos-head need not be inherently confining. As vividly interactive as Keith Jarrett in his standards trio, but with an original songbook and more attention to form, Corea has always been a responsive player, but this trio may be the most informal-feeling group he's had in years. Risk-taking may be a given, but the players are so finely attuned to one another that it never feels that way.

"Sicily" and "Spain" round out the set, referencing Corea's strong Latin roots. There are plenty of sparks and moments of intensity, but Super Trio is ultimately an extremely approachable album that never sacrifices its sense of adventure and complete commitment.