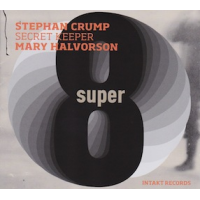 Bassist Stephan Crump and guitarist Mary Halvorson kindled the fire in 2011 during their initial encounter, leading to these sessions recorded in Brooklyn, N.Y. Of course, the respective artists are highly revered within modern jazz schemas and the outside realm, spanning a global presence as first-call session artists, paralleling their solo ventures. Hence, the duo crafts an organic-electric presence. Halvorson's unorthodox and rather beguiling technique sets her apart from many contemporaries. Her liquefying phraseology tenders a weirdly contagious musicality coupled with Crump's thick tone and pliant articulations on acoustic bass.

Crump lays down a firm pulse and engages Halvorson for numerous improvisational dialogues and off-center narratives. The duo musters phantasmagorical dream sequences on "Anti-time," which is a warmly resonating piece, abetted by the guitarist's animated notes and slippery enunciations. Here, Crump's arco passages help form a bizarre thematic foray, as Halvorson's twinkling flurries convey semblances of guilt, lament, and other sensibilities that veer off the radar. And on "Escapade," the musicians delve into some nip and tuck sequences via a quietly frantic mode of execution, but intensified by Crump who subsequently injects an air of urgency into the thematic fabrications.

The duo supplies heaps and bounds of prismatic contrasts. There's never a dull moment, yet it's music with a purpose, often embedded with subtle or wily abstracts and oddball deviations. "Toothsea" is a piece that sparks a fascinating muse as the musicians huddle and pluck their strings in the same tonal range, leading to reactionary-like responses and tersely stated, odd-metered phrasings. The end result is a captivating and somewhat fractured storyline. Simply stated, it's an incomparable engagement that soars above similar settings or frameworks set forth by others.