By C. Michael Bailey
April 26, 2013
Sign in to view read count
Piano reductions of orchestral and vocal scores are a tradition meeting two ends. First, for the transcriber to show off his arrangement and performance abilities. Franz Liszt made a cottage industry of this. Second, to produce sheet music that could be played by the amateur in their perfectly appointed parlor before tea time (queue Beethoven's Symphony Number 6 and open the windows). Artistically, what the piano transcription offers the listener is an x-ray of musical composition. The more intelligent and carefully chosen the notes, the better and more expressive the reduction.

Franz Liszt was a prolific transcriber of orchestral music, featuring his Beethoven and Berlioz reductions in his performances. Liszt's transcribed takes on music have never been out of the repertoire or the recording studio. Considered here is French pianist Michele Campanella's recording of the complete Verdi and Wagner transcriptions coupled with Jon Kimura Parker's modern transcription of Stravinsky's The Rite of Spring and Petrouchka. 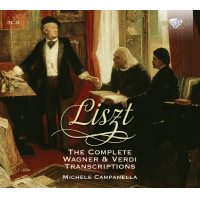 Franz Liszt was a shameless show off. He was a brilliantly equipped musician who thought a lot of his talent and never hesitated to show it to lesser musicians. His transcriptions of Beethoven's Symphonies have been a cornerstone of the serious piano reserve since they were published. Liszt also transcribed opera passages for paraphrases. Two of his favorite composers were Giuseppe Verdi and his son-in-law Richard Wagner. Liszt's complete piano transcriptions of these composers are presented on Michele Campanella's Brilliant Classics volume.

Campanella's performance of the Wagner transcriptions are more compelling than those of the Verdi in part because Listz's scores are better in the Wagner. But, also, the Campanella sounds more inspired in the Wagner. "Isolde's Liebestod" and "Feierlicher Marsch zum heiligen Graal" from Parsifal end the recital properly after having gotten traction on the earlier pieces. Whether these performances compare to Leslie Howard's (as part of his mammoth Hyperion set) will be a matter of personal taste. Both have their charms and in Campanella's playing these lie nearer to the end than the beginning. 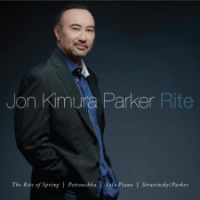 Pianist Jon Kimura Parker is a piano dynamo who precociously decided to make his own modern transcriptions of Igor Stravinsky's most famous ballets, The Rite of Spring and Petrouchka. The simple abstract nature of the scores make this an impressive and daunting task, one that Parker does not shrink from. Parker chooses his notes well, using silence as a sword as trumpeter Miles Davis (as an extension of pianist Ahmad Jamal) did in his treatment of the American Songbook.

Parker makes his Rite shimmer and glow, and in doing so, extends the metaphor included in his thoughts on the piece: "Playing The Rite of Spring on piano I am reminded of the day I first saw an exhibition of Picasso's pencil sketches sise by side with the finished paintings. Despite the absence of color, the angular power of the lines had even a great impact." Indeed, and in the hands of Parker, Stravinsky's masterpiece takes on an other-worldly clarity that goes a long way to revealing the secrets of this famous and controversial work.

Tracks: The Rite of Spring, Part 1: Introduction; Dances of the Maidens; Game of Abduction; Spring Rounds; Game of the Rival Tribes; Procession of the Sage; Dance of the Earth; The Rite of Spring, Part 2: Introduction; Mystical Circles of the Maidens; Glorification of the Chosen One; Evocation of the Ancestors; Ritual of the Ancestors; Sacrificial Dance. Petrouchka: Shrovetide Fair; The Trick; Russian Dance; Petrouchka's Room; The Moor's Room; The Ballerina; Waltz; Shrovetide Fair (Toward Evening); The Nursemaids; The Peasant and the Bear; The Merchant and the Gypsies; The Coachmen and the Grooms; The Mummers; The Scuffle; The Death of Petrouchka; The Ghost of Petrouchka.