By Matt Marshall
November 27, 2011
Sign in to view read count 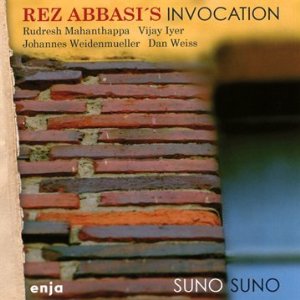 On the second recorded effort with his Invocation group after 2009's Things To Come (Sunnyside), Rez Abbasi opts for more of a rock/groove vibe to underpin the guitarist's modern jazz explorations with his fairly regular cohorts, saxophonist Rudresh Mahanthappa and pianist Vijay Iyer. Gone is Indian vocalist Kiran Ahluwalia, who sang on much of Things To Come, lending it a decidedly Eastern character. But Indian and Pakistani accents still flavor much of this followup, even as it hums, rattles and roars with American flair.

Abbasi's playing is clear, controlled and commanding through much of the record, unraveling in a natural manner with a comfortable blues feel that nonetheless also offers plenty of raw grit. At times, he adjusts his tone to create undulating electric chords behind Mahanthappa's playing, as on the halting, skip-rhythm ballad "Onus on Us." Much of the record's music, in fact, works off of Dan Weiss' rock-steady drumming and Johannes Weidenmueller's hard, driving bass—a far cry from the tabla rhythms of the Indo-Pak Coalition of which Weiss, Abbasi and Mahanthappa are also a part. Still, the Indian quality of the saxophonist's unique, modern voice—with its plaintive yet flowing cries—shines through each time Mahanthappa steps to the mic. Iyer provides a nearly two-minute, classical-sounding solo intro to the otherwise thumping "Monuments," but more often favors the blocks and angles he's known for.

Abbasi cites the Pakistani spiritual music Qawwali as the inspiration for the compositions on Suno Suno ("Listen Listen" in Urdu, the national language of Pakistan). He relates Qawwali to both gospel and blues music—all outwardly simple forms with a subtle complexity. He notes Qawwali's heavy use of clapping, repeated melodies and singing in unison. And these references are easily enough found in the album's music, most obviously in Abbasi and Mahanthappa's tandem playing of melodies, in the playing of repeated blues figures and in the heavy grooves already mentioned.

While the tunes here might rightly be labeled praise music in the Qawwali vein, they carry hefty amounts of exultant Western feel as well, and the seamless gradation of music from often conflicting cultures births a lively new music—neither Eastern nor Western, but effortlessly global; born of the musicians' immersion in musical idioms from around the world. Suno Suno might be intended not just as a call to attention, but perhaps as the secret to world harmony, if only musically speaking for now.

Thanks for Giving; Onus on Us; Monuments (intro); Monuments; Nusrat; Overseas; Part of One.