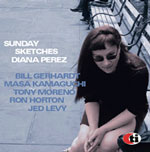 In an era with an overabundance of female vocalists who keep the band in the background, trading more on image than voice, Diana Perez is a refreshing change, keeping her voice honest and involving her band as an integral part of the music. In the quintet of Bill Gerhardt (piano), Masa Kamaguchi (bass), Tony Moreno (drums), Ron Horton (trumpet) and Jed Levy (trumpet and flute), Perez has chosen musicians who are keenly able to perceive her moods. They take their cues, echo, explore, unravel and add breadth to the vocals—but also palpate and prod Perez forward as she artfully portrays these Sunday Sketches.

A sense of pathos, due to both Perez's easy delivery of lyrics about love and loneliness and the rich timbre of her voice, infuses even the more upbeat tunes, resulting in a strong conceptual feel throughout. This is likewise reinforced by the wonderful way her voice can become part of the band, blending with trumpet, piano or sax for a sensual harmonic experience. On her original "Do I Dare, she sets a mood of uncertainty as her voice echoes sax and vice versa, whereas "Sunday in New York paints both a vocal and instrumental picture of the special atmosphere that occurs during the quietest time in our city that never sleeps.

The multiple Brazilian numbers exquisitely suit the atmosphere. On Jobim's "Useless Landscape, Levy's flute and Moreno's brushes set a tropical vibe for Perez to deliver her poignant message, "Pretty World includes beautiful brass/vocal voicings, and Luiz Bonfa's masterpiece "Black Orpheus is here gorgeously restyled with emphasis on flute, bass and percussion. "Something Cool is an emotive showcase for both Horton and Perez that brings to mind a time when a vocal release was as memorable for the voice as it was for the interplay with a trumpeter like Clifford Brown, Kenny Dorham or Art Farmer.

A strong session all the way round.

Sunday In New York; Do I Dare?; Useless Landscape; Something Cool; Pretty World; Colors; Black Orpheus, If I Knew Then; My Foolish Heart.