The Pizzarelli Boys: Sunday At Pete's

By KEN DRYDEN
November 7, 2007
Sign in to view read count 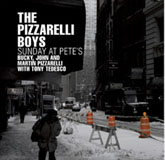 Bucky Pizzarelli was exposed to music from an early age, taught guitar by his uncle (Pete Domenick) after school. Domenick hosted frequent family sing-alongs at his home, in which the young Pizzarelli learned the basics of playing rhythm guitar and more than a few popular songs. After he became a professional and began a family of his own, the tradition continued, with artists like Milt Hinton, Slam Stewart, Major Holley, Les Paul, Joe Pass and George Barnes taking part in jam sessions with Pizzarelli in his living room.

Over the years, Pizzarelli has appeared on countless record dates: as a sideman, leader and soloist, first playing rhythm guitar but often playing lead on duo dates and small group sessions, occasionally joined by his son John on guitar. But for this date, the senior member of the clan returns to playing acoustic rhythm guitar, with John playing lead on electric guitar, and Bucky's other son Martin (a long-time member of John's trio) on bass, plus drummer Tony Tedesco, a frequent collaborator with John over the past two dozen years.

John selected the songs for the family's first record date without an entire band joining them, including some rarely played chestnuts, though some will be familiar to anyone over the age of fifty. The chugging rhythm of "Sweet Sue provides a warm introduction to the family gathering, while John and Bucky solo with gusto on the brisk treatment of "Whispering.

Both "When You're Smiling and "In the Good Old Summer Time feel like a time-travel expedition to an earlier era; all that is missing are the accompanying vocals, laughter and clapping along that would have likely taken place at Uncle Pete's home. "Red Wing has the flavor of 1940s Western Swing, while Bucky seems to create the sound of a Jew's harp on his guitar during the introduction. "Night on Garrett Mountain, a blues evidently worked out in the studio, is the only piece of recent vintage, but it provides a suitable finish to what was a fun trip down memory lane for the Pizzarelli family, which will never tire of playing together when the opportunity arises.

About The Pizzarelli Boys