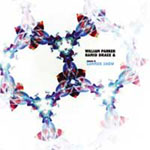 Summer Snow is the second studio recording from the adroit rhythm team of bassist William Parker and percussionist Hamid Drake. Their first duo recording, the poly-ethnic exploration Piercing the Veil (AUM Fidelity, 2001), was recently reissued together with the previously unreleased live concert recording First Communion. This sequel finds the telepathic pair delving even deeper into indigenous cultural traditions for inspiration.

Parker and Drake expand further on the pan-global experiments of Don Cherry, Codona and the Art Ensemble of Chicago. Eschewing the occasionally dissonant arco work and atonal reed outbursts of their first collaboration, this record flows with a meditative, hypnotic quality. Despite the primarily reflective aspect, the session contains a variety of moods and colors.

The album takes a shadowy detour half-way through, beginning with "Sifting the Dust." Scintillating metal harmonics and resonating echoes from water bowls, gongs and chimes pervade this haunting musical landscape all the way through "Traces of the Beloved."

Summer Snow incorporates jazz improvisation into myriad ethnic traditions in a satisfyingly organic way. Blending cultures and aesthetics, this is global music in the truest sense, equal parts uncharted future and primordial past.