Florian Ross / Ramsden and Lodder: Suite for Soprano Sax and String Orchestra / Above The Clouds 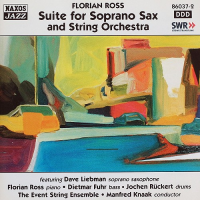 The Two Sopranos. Naxos Jazz highlights the soprano saxophone in two vastly different settings on two recent releases. The instrument that Sidney Bechet put on the map and John Coltrane played on his “Favorite Things” (and with which Kenny G made his fortune) is a tender and demanding mistress. Like the clarinet, few jazz musicians play it well. On the two discs considered here, the soprano saxophone is played in a resourceful if not innovative manner.

Florian Ross Again.... Suite for Soprano Sax and String Orchestra was composed by German pianist Florian Ross. Ross debuted on Naxos Jazz with Seasons and Places (86029-2, 1998), a collection of Post Bop original compositions crackling with ingenuity. He continues exhibiting his considerable compositional skills with the current Suite. He enlists the services of a leading soprano saxophonist, David Liebman and part of his rhythm section from his previous Naxos outing. Ross has written a quasi-classical piece to be played with a jazz rhythm section, string orchestra and lead instrument. The results are mixed and interesting.

Suite Child of Mine. This multi-part composition starts with a sound more like Charlie Parker with Strings in spirit than a true classical piece. Ross and Liebman strike as good a compromise between the composed and improvised as one can expect. The music is based on melodic ideas composed by the 20th century English composers. The results range from late and post Romantic classical tradition to Free Jazz. On the whole, the Suite is interesting listening in the same way that Mahler’s song cycles are. There is a lesson and the music must be consumed and digested before consideration.

By Contrast... Mark Ramsden and Steve Lodder have assembled an improvised collection of pieces for the soprano saxophone and organ. Recorded in St. Thomas Church, Clapton Common, London with a restored 18th Century organ, Ramsden and Lodder use the location and instrument to provide and ethereal vehicle for the soprano saxophone. The effect is nocturnal and appealing. Not necessarily romantic, but a little dark in a non-threatening way, not unlike John Field’s Nocturnes for piano. The majority of the pieces are improvised originals with the exception of Albinoni’s “Adagio” which is readily recognizable and well adapted to the soprano reed. If It Ain’t Baroque. Several performances are very Baroque in flavor and quite stunning. The aforementioned “Adagio” and Ramsden and Lodder’s own “Adagio and Andante” are readily Baroque. The highlight is the title track recorded with strings. Above The Clouds effective disc that fades into New Age and Space Music as much as it remains jazz.

Both discs show Naxos Jazz’s commitment to exposing Jazz in the mosaic that it is— a true melting pot of music.

Track Listing ( Above The Clouds ):Adrift in Your Dreams; Retrove; andante; the Juggler; Y; Adagio; Confluence; Flows Vernalis; Sainte Chappelle; Adagio and Andante; While the Pulse Still Beats; The Tumbler; Above the Clouds (Total Playing Time 67:17).