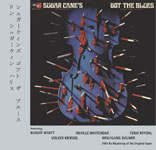 Violinist Don "Sugar Cane" Harris seemed to burst onto the scene with two appearances on Frank Zappa's classic Hot Rats (Rykodisc, 1969), resulting in a flurry of recording activity that mysteriously died out by the mid-1970s. Got the Blues captures two electrifying performance at Berlin's Philharmonic Hall from November, 1971, a potent combination of groove and improvisational freedom that makes Harris' later disappearance from the scene (he passed away in 1999) all the more curious.

The quintet of musicians come from diverse backgrounds: from Britain, Soft Machine drummer Robert Wyatt and bassist Neville Whitehead, who traveled in similar circles; and from Germany, keyboardist Wolfgang Dauner and guitarist Volker Kriegel, two multi-disciplinary players comfortable across a broad spectrum of styles, one example being Kriegel's work on The Dave Pike Set's Live at the Philharmonie (Promising Music/MPS, 2008). Norwegian guitarist/ECM mainstay Terje Rypdal replaces Kreigel on Got the Blues's most purely jazz-centric track, Horace Silver's "Song for My Father," which may sport the album's most relaxed vibe, but still can't seem to restrain Harris' fiery delivery.

The balance of the disc's four extended tracks belong to Harris. "Liz Pineapple Wonderful" may at first revolve around a simple set of changes and, later, a one-chord vamp, but it grooves mightily with relentless energy. In addition to a "burning down the house" solo from Harris, he also sings on the track, as he does on the pseudo-swinging minor-keyed title track which, after another introductory two-chord vamp, turns modal and double time for individual and in tandem solos from Dauner and Kriegel before a finale with everyone in the pool for three minutes of spirited free play. Harris also sings on the funky closer, "Where's My Sunshine," another lengthy vamp that morphs into a blues, with a surprisingly authentic piano solo from Dauner.

Harris' unrelenting and passionate delivery keeps the excitement level high throughout, despite Got the Blues' largely simple and vamp-based tunes. And while Kriegel's jazz/rock tendencies are no surprise to those familiar with him, hearing the usually free jazz-centric Dauner and Whitehead kick out the jams alongside Wyatt's powerful drumming is an eye and ear-opener. In many ways, it's this very multi-disciplinary nature of this collective that allows an album this compositionally spare to be so viscerally compelling.

Harris recorded a number of other discs for MPS that will, no doubt, see first-time release on CD thanks to Promising Music. Until then, Sugar Cane's Got the Blues will serve as a fine introduction to those unfamiliar with this unsung hero of jazz/rock violin.

Liz Pineapple Wonderful; Sugar Cane's Got the Blues; Song for My Father; Where's My Sunshine.