By Geno Thackara
January 9, 2020
Sign in to view read count 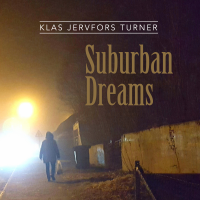 The title suggests something small-scale and maybe quaint. The moody cover hints at sounding dark, thoughtful and/or lonely. The first thing to actually hit your ears here, however, is a sly bit of reggae-funk draped with slinky Eastern saxophone and wailing horns straight out of a Broadway cabaret. There's also Latin dance, European folk, modern experimental and much more to come over the ensuing hour. Whatever impression one gleans from the surface, this affair is continually happy to deliver something fresher and more fascinating than it seems. The album benefits from not just a globe-spanning palette of instruments, but a cast that can stir up the gumbo and start a dance party hot enough to cook it.

It's always an impressive pleasure to hear an artist's debut arrive so fully formed. That's not really surprising in this case, considering that it's a debut built on decades of shows and session work—Klas Jervfors Turner is the kind of name that's a fixture in many a fellow player's address book even if it's not widely known elsewhere. With any luck this delightfully clever and worldly affair should help fix that oversight for any jazz-loving ears fortunate enough to hear it. If the suburbs have a distinct life and color away from the more obvious bustle of the big cities, so does Suburban Dreams take delight in heading for the out-of-the-way paths in its own sharp and good-humored way.

Though it originally grew from a soundtrack for a documentary film about Swedish fishermen, the recording's European roots are joined with a South American undercurrent of tango and hot-nights allure. Multi-horn jazz grooves and gypsy folk gain another layer of mystery when joined by electric piano and wah-wah guitar. "Cruising in Night Lights" gives its spotlight to dreamy electric keys and raunchy trombone, while the title track weaves a particularly brass-heavy dance somewhere between the Jamaican beach and the avant-garde theater with a sheen of trippy synth on top.

Impressive as Turner's evocative trumpet and trombone work is, it's still secondary to the craft behind his snazzy compositions and skillful arrangements. He's happy to play with reverbed guitar, spry Latin percussion, fluttering flute and funky Wurlitzer alike, spacing each thing out where it's effective and giving all the players space to contribute something distinct. He can drift through a spooky Miles Davis-like passage almost unaccompanied, then have the crew step in and cook like a pickup band in a hot N'awlins street parade. Full of catchy hooks and with an unshakable sense of rhythm always at the center, Suburban Dreams takes us around the world and somehow always makes it feel like home.