By Annika Westman
December 2, 2005
Sign in to view read count 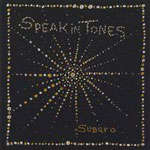 Subaro is an exciting double CD in the genre of world jazz, produced through a collaboration among more than a dozen musicians, with Daniel Moreno and Mike Ellis as initiators. The recording is the result of a two-year series of concerts and multimedia events at the NYC club 56 Walker Street with players from jazz and world music communities.

This is very interesting music indeed, a mixture of elements from jazz in the slightly avant-gardistic area and ethnic sounds from percussion instruments, with the balafon (a West African vibraphone-like instrument with gourd resonators) giving its very significant flavor on many of the 21 tracks. AlphaPocket, a new imprint run by saxophonist Mike Ellis, labels this CD "pancultural landscapes, which fits perfectly. Titles like "Mali Overdrive" and "Samba Low Rider" give a hint of the multicultural origins, but the music has a definite jazz flavor, brought both by the jazz musicians involved and the "here-and-now attitude of jazz at its best.

This music often walks more on the meditational than on the wild side, with sometimes quite minimalistic changes in the grooves. So the arrangements are loose, more like a jam session. The musicians enter themselves, and those among their listeners who want to come along, into a state of musical trance. "Invite the unexpected is AlphaPocket's motto, and one example of this is the birds that can be heard here and there—they just happened to be singing outside the studio in Salvador, where the recording was made.

On the title track Jean Paul Bourelly's electric guitar takes the lead position, creating a nice contrast to the ethnic flavors with its distorted, somewhat bluesy sound and a playing style leaning a bit towards fusion and rock. In other places it's Mike Ellis' sax or Graham Haynes' cornet walking or dancing in the front, with the percussionists bubbling in the background. Malian keyboardist Cheick Tidiane Seck's contributions, including very characteristic vocals and chanting, also deserve mention. On the tracks where Reggie Washington does not play, Darryl Hall takes care of the bass—not a bad substitute... although the bass playing is always very cool, staying in the background, just supporting the grooves.

Although the whole recording is really a group collaboration, it is still very interesting to study the comments, along with more detailed credits, in the notes on AlphaPocket's web site (not provided in the CD booklet). They explain that "all the titles on this CD and all the pieces ever performed in concert were basically free form pieces with very little or no verbal preparations as well as little or no preconceived musical ideas.

Jazz music today is full of architects, outlining their music down to the smallest details, using bar-counting arrangements. On the other extreme we hear wild, free-form experiments breaking up all rhythmic grooves. But there are so many more paths to explore. Listen to Subaro and get carried away into another landscape, somewhere in this global village!

Visit Mike Ellis on the web.

About Speak In Tones