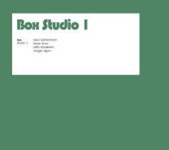 Studio 1 not only represent the debut of a significant new group on the electronic improv scene, but a transatlantic supergroup at that, with musicians hailing from Finland, Norway, Sweden and the United States. Box was originally formed when writer/film-maker Philip Mullarkey brought together guitarist Raoul Björkenhiem (Krakatau, Scorch Trio), keyboardist Ståle Storløkken (Supersilent, Humcrush), drummer Morgan Agren (Mats/Morgan Band, Zappa's Universe) and bassist Trevor Dunn (John Zorn's Electric Masada, Trio Convulsant) as part of his art/film project, Box. Recorded in just two days with no overdubs or editing (digital or otherwise), what you hear is exactly what went down, and it's perhaps most surprising that, despite the reputation for extremes that Björkenhiem has in particular, Studio 1 may be considerably left of center, but it's surprisingly listenable.

That's not to suggest there aren't some powerful moments where the guitarist lets loose with some serious shredding. The sixteen-minute opener, "Untitled 9," begins atmospherically, with Björkenhiem's heavily processed guitar and Storløkken's assorted electronics creating a cinematically otherworldly landscape. But when Dunn and Agren enter with a propulsive rock beat, Björkenhiem begins to lean towards a still largely textural but more skronking approach, transcending mere virtuosity into a space where his guitar becomes nearly unrecognizable. Building to a relentless climax, the group comes to a grinding halt, reverting to near silence, with Björkenhiem switching to the bowed and fretted viola da gamba, combining jagged harmonics and unexpectedly melodic lines while the rest of the group begins to gradually ramp up until reaching another plateau of sonic and rhythmic intensity.

The closest antecedent for the music here is, indeed, Supersilent, whose 8 (Rune Grammfon) was a highlight of 2007. Where Box differs is that, while it's equally adept at the use of dynamics and sonic manipulation, it tends to avoid the moments of pure beauty to which Supersilent sometimes aspires. By having a conventional rhythm section, Box also leans more towards rhythmic devices, even when they're as staggered as they are on "Untitled 11," where Storløkken creates an electronically driven beat that sets the context for Dunn and Agren's support of Björkenhiem's swells and bends.

"Untitled 7" begins with Storløkken creating a sound not unlike an mbira (Zimbabwe finger piano), albeit one that's been dropped a few octaves. The track, like all of Studio 1's six untitled pieces, is episodic in nature, yet bears an uncanny logic and form that belies its in-the-moment creation.

Like much of the electronics-based improv coming out of Northwestern Europe, Box doesn't spend much time working within conventional concepts of form or development. But despite being an album that challenges preconceptions, Studio 1 is far too cohesive to be considered an aimless m élange of sound and pulse. There's clearly a greater collective mind at work here, making Box's first album one that will, hopefully, not be its last.