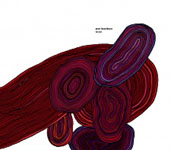 Norwegian trumpeter Arve Henriksen continues to mine the space between the notes, the power of silence and the beauty of nuance on Strjon. Unlike Chiaroscuro (Rune Grammofon, 2004), which was based on live improvisations, real-time sampling and subsequent post-production, Strjon is a studio concoction. While there's equal collaboration and extemporization with keyboardist Ståle Storløkken and guitarist Helge Sten—two of Henriksen's coconspirators in the fearless and forward-thinking ambient noise group Supersilent—there's also structure to be found, based on sketches that in some cases date back to Henriksen's youth.

Those looking for delineated tunes with strong form and propulsive rhythms will be surprised to hear Henriksen achieve so much with so little. Henriksen's music occupies such a tranquil stasis that it's tempting to think of this as ambient music, but that would be a mistake. Henriksen places demands on his listeners, but is less concerned with notes and pulse and more about a selfless pursuit of sound as direct emotional conduit. All music evokes an emotional response, but rarely does it occur with such clarity, immediacy and simple elegance.

Strjon is the medieval name of Henriksen's hometown of Stryn on the west coast of Norway. The twelve pieces create a mental travelogue around aptly named titles like "Leaf and Rock," "Green Water" and "Glacier Descent." With the exception of occasionally clear guitar chords and Henriksen's trumpet—which is often disguised by a shakuhachi-like tone—it's difficult to know who is doing what here, nor does it matter. The music ranges from the sparsity of a lone trumpet on "Evocation," where Henriksen's firm control of multiphonics creates a sound paradoxically soft and harsh, to the keyboard-driven and darkly spiritual "Ancient and Accepted Rite."

Reflective of a communion with nature, a background that's as much contemporary classical music as it is ethnic folk music and minimally jazz by conventional definition, Strjon does have moments of rhythm, though they're likely to be caused by the repeat of an echo or the striking of a bow on a guitar. The album marries the melancholy economy and lyricism of Chiaroscuro with Supersilent's ability to make noisy textures starkly beautiful, as on "Black Mountain." "Alpine Pyramid" is a fugue- like multi-layering of trumpets—expansively striking, despite an inherent subtlety that's consistent with the rest of the disc.

The Norwegian improvising scene is renowned for its focus on musicians as a means to an end rather than the end itself. Henriksen is undeniably accomplished, in particular in his ability to stretch the sound of his trumpet beyond conventional expectations. On Strjon he once again sets a goal of painting aural images evocative of a wide range of emotions rather than drawing attention to himself. Henriksen's ability to comfortably blend technology with sounds of an acoustic nature makes Strjon an otherworldly but wholly organic—and moving—experience.