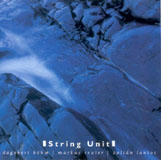 Billed as Ambient World Jazz, and described as "crimsoid ingenuity seasoned with Oregon and Shakti, it's certainly a good capsule description of this intriguing record by acoustic guitarist Dagobert Böhm, touch guitarist Markus Reuter and violinist Zoltán Lantos. An album of elegant beauty, String Unit might, at one time, have been unceremoniously lumped into the New Age category, a certain kiss of death to many. But despite being easy on the ears, all smooth surfaces and without a single jagged edge, there's a depth to these ten original compositions that suggests accessibility needn't be synonymous with lightweight or insubstantial.

The Shakti reference is evident from the opening notes of "Indiaespara, but without the high velocity approach that's such a fundamental to John McLaughlin's ongoing exploration of the nexus point of East and West. Lantos, who lived and studied in India for eight years, demonstrates a sinewy flexibility on his 5-string violin, maintaining the cultural ambience even when the song evolves into a two-chord vamp that's supported by Böhm and Reuter. But there are elements of European classicism in his playing as well as an unmistakable eastern microtonality

Elsewhere there are folkloric elements of early Oregon, although none of the writers here possess the same harmonic distinction as that group's primary composer, guitarist/pianist Ralph Towner. The writing leans towards compelling lyricism—dark-hued at times, but always attractive—and simpler solo sections that provide everyone the opportunity to stretch, but always with the concept of melody first and foremost in their minds. Still, two takes on Böhm's deceptive "Half a Waltz are largely through-composed miniatures that amble gently and naturally, despite being in an irregular meter.

The equally brief "Interlude finds Lantos drawing a clear line between the East and the lilting approach of Celtic music, with Reuter's ambient guitar loops creating a warm cushion. Reuter's "The Lake is a subtle feature for his touch guitar, a self-accompanying, pianistic 8-string instrument that's tapped rather than plucked (much like King Crimson/Peter Gabriel Alumnus Tony Levin's Chapman Stick) and covers the range from bass through guitar. Böhm's "The Nightbirds provides a good example of the instrument's capabilities, with Reuter's heard solo for the first minute of this piece of soft melancholy.

The trio saves the best for last, however. The collaboratively written "Time, is fifteen minutes of sonically sumptuous audioscapes, expansive and dramatic but in the subtlest of ways. Lantos' violin is thickened with delay, and Böhm's role as producer is front and center as he shapes a lavish landscape throughout, even as the pace picks up for a lengthy solo by Lantos that's largely supported by Reuter's almost minimalist patterns and pulses.

In a world where cultures clash and people increasingly look for ways to compartmentalize their lives, String Unit is a quiet revolution that defies all attempts at classification and ethnic pigeonholing.

Track Listing: Indiaespara; Tau; Circle; Half a Waltz; Interlude; The Lake; The River; Nightbirds; Half a Waltz - Guitars Only; Time.