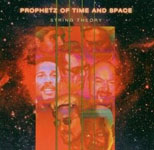 Steve Vasconcellos sure knows how to pick them. With a core group including legendary Mahavishnu Orchestra violinist Jerry Goodman, Weather Report drummer Leon "Ndugu Chancler, in-demand LA saxophone ace Brandon Fields and Miles Davis percussionist Munyungo Jackson, the bassist's five year-old Prophetz of Time and Space has plenty of potential as an approachable but uncompromising contemporary electric jazz group. String Theory meets its promise head-on, and the disc will appeal to those who like their fusion on the lighter side.

That's not to suggest that Prophetz approaches smooth jazz territory, because the group's music has a sense of commitment and interplay that defies the programmatic aspect associated with that label. The program is a mix of originals by Vasconcellos and keyboardist Dave Kempton, along with a live version of saxophonist Wayne Shorter's classic "Footprints that takes its time to unfold and features a solo by pianist Otmaro Ruiz that's filled with classical and Middle Eastern references. Ruiz, a former member of John McLaughlin's Heart of Things touring band and a guest on the legendary guitarist's Industrial Zen (Verve, 2006), demonstrates an intuitive blend of technical virtuosity and thematic development that makes his relative obscurity a mystery.

Likewise Fields, who solos passionately throughout but never loses sight of where he's going. On Vasconcellos' "Milesaway the saxophonist proves he's as capable of interaction as he is of leading on the atmospheric intro that references the title track to Miles Davis' In a Silent Way (Columbia, 1969). Fields and Vasconcellos play give-and-take before a more propulsive groove that takes Miles' "It's About That Time as a starting point. Chancler and Vasconcellos anchor and respond to a solo section where individual voices peek out periodically from a more collective "nobody solos and everybody solos approach.

Goodman may not have the same profile as he did with Mahavishnu, but he hasn't lost any of his power or imagination. His tone is surprisingly thick for an instrument that can sometimes sound shrill. He gets plenty to work with on Kempton's Spanish-tinged and irregularly metered "Tranzplacement of the Underbearing, the bassist's funky "Boo Jee Woo Gee, and "Healing and Revealing, which, if it weren't for Chancler's more visceral groove, could fit harmonically into the ECM universe.

Prophetz may be his project, but Vasconcellos doesn't grab much of the spotlight. Content instead to be a team player and overall conceptualist, he's shaped String Theory into a democratic affair that's defined by a simmering energy and accessible sound—that's light but never lightweight.