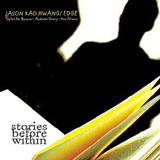 Stories Before Within is the second album from violinist Jason Kao Hwang's three-year-old ensemble, Edge. Their self-titled debut for Asian Improv Records was one of 2006's sleeper hits, a record brimming with stirring melodies, unorthodox arrangements and stunning group interplay. No less imaginative, their follow-up blends Eastern and Western traditions with even greater conviction.

"From East Sixth Street" invokes historical jazz traditions culled from the Lower East Side neighborhood that has been home to generations of improvisers, including Hwang. A swaggering pulse and funky, angular line knits the present to the past with expressive brio. Bynum's splintery brass fragments introduce robust glissandos and piercing harmonics from Hwang and Filiano, as they ascend the orchestral palpitations of Drury's multi-hued drum kit.

A majestic fanfare sets the stage for the stately "Third Sight," as Hwang and Bynum careen over a propulsive vamp embroiled in vivacious discourse. Abruptly switching gears, Drury and Filiano submit their own lyrical soliloquies before the exuberant reprise.

Closing the album on a bittersweet note, "Embers" unfolds with languid, neo-classical restraint as each member contributes heartfelt variations on a plangent melody.

Another brilliant collection of forward-thinking compositions from Hwang, Stories Before Within offers a rich blend of jazz and chamber music that seamlessly merges Eastern and Western traditions into a singular, global hybrid.