Sting: Sting: Bring on the Night

By Trevor MacLaren
October 8, 2003
Sign in to view read count 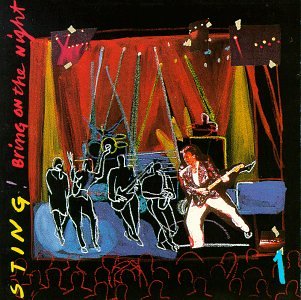 With pop/rock group The Police, Sting (aka Gordon Sumner) created some of the greatest pop songs ever. These songs were a mix of pop, rock and ska meshed with articulate lyrics that would render the band's catalogue legendary. But as the band had peaked with its best selling record, Sting went off to pursue a solo career. During the process of creating his debut record, Sting sought out a separate path of musical ideas than the ones that made up his work with the Police. Sting looked back to his first love, which was jazz.

When taking to the studio to record what would be Dream of the Blue Turtles, Sting revisited the fusion sounds that were a part of his pre-Police band Last Exit, pulling together a band of killer jazz players that featured Omar Hakim, Kenny Kirkland, Daryl Jones and Branford Marsalis. The idea was so important that Sting had the sessions filmed and released as the documentary Bring on the Night. Due to the varying styles and pop overtones, Dream wasn't the jazz record that such players would be expected to make. In fact for many jazz fans thought it was all hype and no action. Yet the record has many redeeming qualities, namely its particular brand of fusion and Sting's brilliant songwriting.

With the release of the documentary came an expensive double live record that only appeared in North America on import and unfortunately did not get a lot of press. Bring on the Night was the jazz record that Sting hadn't made with Dream of the Blue Turtles. Over the course of the record, Sting band mates work their way through obscure and classic Police tracks and Blue Turtles material. With live atmosphere the band cuts loose and frees the restraint of recording a pop record. Though some tracks work better than others, the feel through out the record works more into the ideology of jazz than any post- or pre-Sting solo work. On this collection Sting helped to evolve a newer version of the jazz/pop/rock fusion.

Since he had the band and the chops, Bring on the Night brought to life many works that have failed in the past. It still doesn't stand-alone as an essential jazz or pop record, but makes a solid stance for a crossover record. Even though many fans of jazz detest any artist crossing over and claiming themselves a jazz player, Sting's intent opened the ears of pop fans who would normally have banished all jazz in sight.